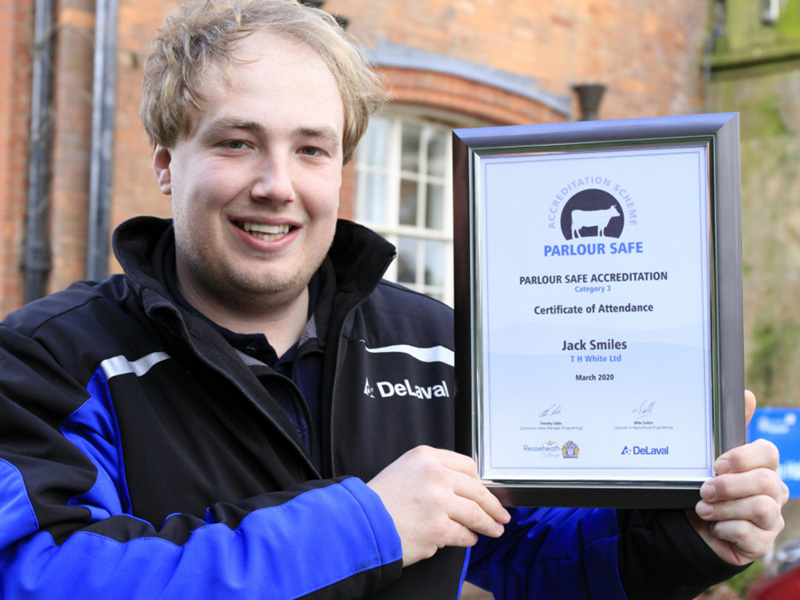 Many T H WHITE Dairy customers will know our young Dairy engineer, Jack Smiles. Still only 27, Jack has worked on many of our recent installations including the 20 x 40 swing-over 50 degree herringbone parlour for the Powell family at Priddy (see separate story here) and an update to the conventional parlour at the impressive training facility at Lackham College. He has also carried out VMS installations for Hugh Miles at Witham Friary and the Hanns at Rodden Down.

Jack’s story is one that illustrates just how well the relationship between a company, a member of its staff and the customers can work. Joining T H WHITE straight from school as an apprentice in 2010, Jack initially trained as a refrigeration engineer. After completing his two-year release course he started working on conventional milking parlours, adding VMS robotic milking units to his skill set in 2014.

“I love the job,” Jack says, “especially the technical challenges. But it’s also about getting out into the countryside, meeting lots of farmers and helping them to keep their dairies running at peak efficiency. There are so many new things in the world of dairying that it can take a lot of a farmer’s time just to keep up with it all, but that’s where we can help to point them towards developments that will make a real difference to their business.

“There’s definitely a place for conventional and new technologies, but it’s important to remain open-minded and take the best of what’s on offer as it applies to any particular farm. My job is to push dairying forward, helping farmers to survive and thrive, at the same time hopefully improving life for all our dairy customers by bringing them innovations and high standards of service.”

T H WHITE Head of Dairy, Nigel Ellis is certainly impressed by Jack’s progression: “It’s very rewarding to watch a young person start as an apprentice and then move through different stages, all the time adding to their capabilities. Jack is now a fully fledged Dairy Engineer and at 27 he is still just at the beginning of his career. He has real ability, so who knows what levels he will have reached in a few years time?”