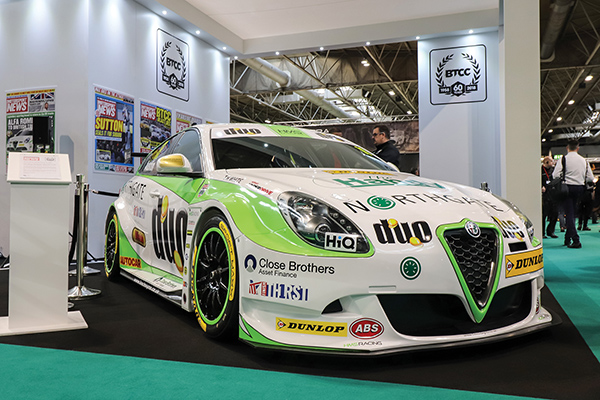 The long-awaited return of Alfa Romeo to the British Touring Car Championship (BTCC) came a dramatic step closer with the reveal of the stunning 2018 BTCC Alfa Romeo Giulietta at the NEC Autosport show in January.

Back in October, when we announced the deal that would see Swindon-based Handy Motorsport (HMS) and race-winning driver Rob Austin take Alfa Romeo into the competition, we ‘wrapped’ our Giulietta Veloce demonstrator from T H WHITE’s Hillmead dealership in the eye-catching team colours for a photo-call. But at the NEC it was the real thing.
Journalists and eager enthusiasts thronged the official Motorsport News BTCC stand at the show as the car was revealed – and wow – it did look good!

Raring to take the fight to the track, the white and green Giulietta certainly means business and Rob Austin and team principal Simon Belcher gave thanks to everyone who had made it possible, including long-standing sponsor Duo which has formed a new partnership with HMS for 2018.

Members of T H WHITE Motor Group’s team – who put much effort into work done by the Alfa Romeo Dealer Council in securing the initiative – were at the Autosport show to explain and demonstrate the car to the many admiring visitors. T H WHITE is the first dealer sponsor to be added to the car’s livery.

Rob and Simon are justifiably confident the squad will be able to make big strides with the development and set-up of the Giulietta over the coming weeks, and the entire team is absolutely relishing the opening weekend of the new season on 7-8 April at Brands Hatch. “We have a great team of guys here who have built a beautiful BTCC car which, on paper, looks to be a notable step forward from our previous car,” added Rob, “We have great support from some fantastic partners, we have reintroduced a truly iconic brand into top level UK motorsport.”