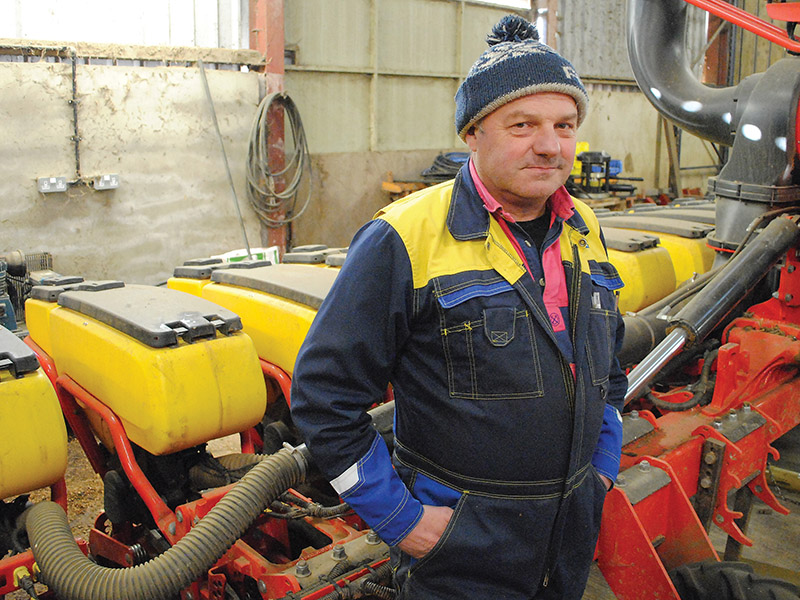 A Gloucestershire farming and contracting business has changed to a Vaderstad Tempo precision seeder from a shoe to disc coulter type due to its consistency of planting depth.

Pither Agriculture Ltd farms in the Vale of Gloucester and the Cotswold Edge and the difference in temperature between the two areas plays an important role in the establishment programme of the company’s 600 acres of autumn-sown oilseed rape.

“At that time of year there is a 2deg difference between the high ground and the Vale,” says Derek Pither, “and as it gets later in the season the temperature drops faster so we need to plant about 10 days earlier.” Oilseed rape is one of the break crops grown by the company on its 5,000 acres spread across a 10-mile radius from its base at Droys Court, Little Witcombe.

“We’re ring-fenced in Gloucestershire,” laughs Mr Pither. He explains that the acreage is split 50:50 between combinable crops and grassland. Winter wheat (1,500 acres) for the 2018 harvest, and ‘small amounts’ of winter and spring barley. There’s also maize (60 acres), which, together with 300 acres of 3-4 year leys and 200 acres of meadow pasture, provide silage and hay for a 1,400 head store-to-beef herd, plus 1,500 acres of hill grazing.

A contracting operation accounts for 20 per cent of the business, which helps to justify the purchase of machinery such as the firm’s 6m power harrows, self-propelled forage harvesters and combine harvesters. There are also some 650 acres of maize drilled under contract, which, together with the oilseed rape acreage, validated the purchase of a new precision seeder last year, a 6m mounted Väderstad 12-row Tempo.

“We used to establish all the oilseed rape with our 8m Väderstad Rapid and the maize with a shoe-type coulter precision seeder,” Mr Pither explains. “We wanted to change the seeder and trialled a number of manufacturers and models last autumn. From the demonstration we could see the benefits of the Tempo’s discs, which cut rather than bulldoze a slot, and so allowed a more consistent planting depth, particularly in our varied soil types.

“I have considerable experience of Vaderstad equipment – I’ve run Rapids for the past 15 years and I liked the Tempo’s build quality. It’s heavy as it incorporates a lot of high-grade steel and we run it on a 200hp long wheel-base tractor with big wheels. I’m also impressed by the research and development that has gone into the drill.”

Mr Pither specified the Vaderstad Tempo precision seeder with micro-fertiliser/slug pellet applicators and wheel mark eradicators, and T H WHITE’s Toddington branch delivered the drill in time for the 2017 sowing campaign. It established all the maize and, due to the temperature difference between the Vale and the Cotswolds, the bulk of the autumn oilseed rape. Ideally drilling takes place throughout August, with the Tempo establishing the Vale ground at a 51cm (20ins) spacing.

However, towards the end of the month the high ground is drilled with the Rapid at a standard 12.5cm spacing. “We need to plant 10 days earlier on the brash and we don’t want to use the wide spacing as we won’t get the canopy coverage before winter with the added potential problem of pigeons coming in,” Mr Pither explains. “And the later it gets the more critical it becomes as the temperature drops faster.”

Last spring the Tempo was configured as an 8-row when drilling the maize at a 76cm (30ins) spacing, but for this season the drill will be in its 12-row format for both the maize and the oilseed rape. “The ability to use the drill as either an 8 or 12-row definitely gives us flexibility.

“But it does take a day to reconfigure the drill and I don’t see the benefit of going to the wider row width; I can’t see a problem with 51cm or a disadvantage, the crop has still got a reasonable spacing. A 25 acre trial in the Vale in 2016 showed that there was no detriment in oilseed rape yield by going wide – the additional space gave the plants room to branch and compete.

“The Tempo is more expensive but we can drill faster, around 11kph. Although we don’t push it, we aim for 100 acres per day in oilseed rape, and there is more even establishment due to the consistency of planting depth. Also, we can apply micro-fertilisers or slug pellets when drilling. If necessary, the E-Control system gives us the ability to vary the seed rate from the cab. So far, we’ve drilled 700 acres of maize and 500 acres of oilseed rape. We’ll know more about the Tempo after harvest, but overall I’m very impressed with the drill.”

To find out more about Väderstad seeders or arrange a demo contact any T H WHITE Agricultural branch. Contact us now to obtain the best order terms before 31 July.