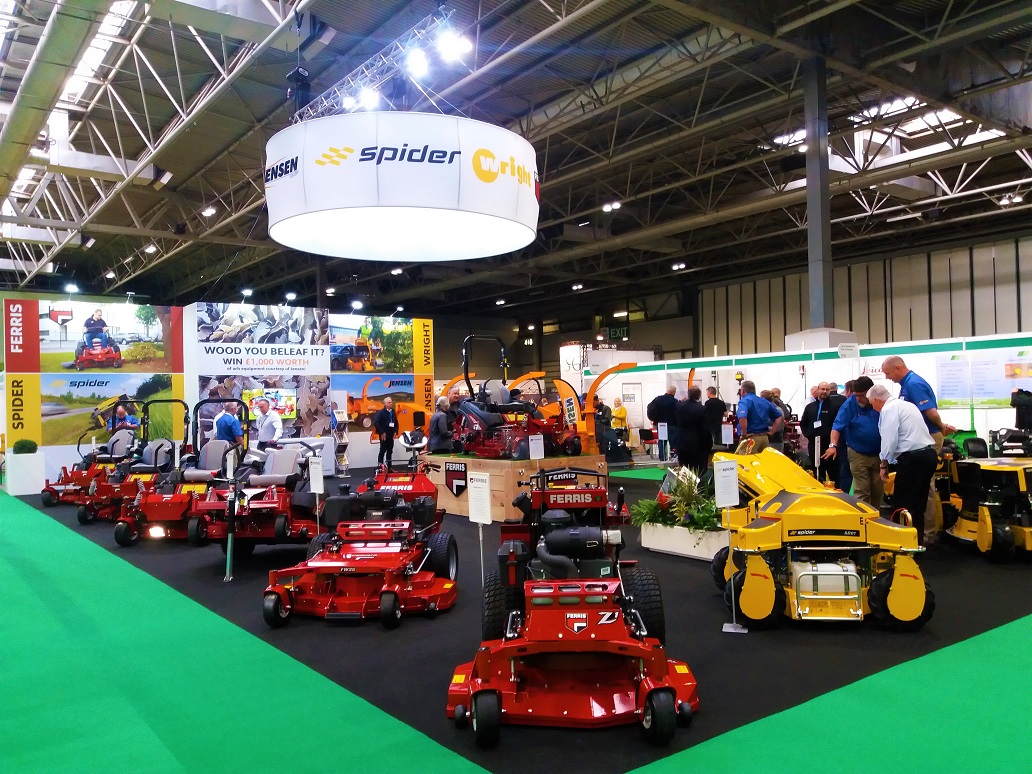 The team from T H WHITE Machinery Imports were delighted to support the IOG and attend the 2018 SALTEX event again last week, held at the Birmingham NEC on 31st October and 1st November.

The two-day exhibition was attended by over 300 exhibitors and several thousand visitors, with the Machinery Imports stand, representing Ferris, Wright, Spider and Jensen brands dominating the space as the second-largest exhibitor stand in the whole venue.

With an open space stand of 175m2 visitors to the stand were able to see a range of machinery from the Ferris, Wright, Spider and Jensen brands all in one place, with a large team on hand to answer any questions and talk to visitors about the machinery on display in detail. 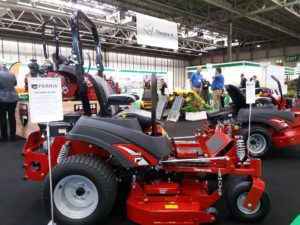 Taking centre-stage on the stand was a large suspension demonstration unit from Ferris. Featuring a Ferris IS®2100Z on top, the suspension unit was able to show visitors exactly how the patented Ferris IS® suspension technology works on uneven terrain, with staff able to explain in more detail the benefits of the suspension on comfort, productivity, safety and machine longevity.
As the only commercial zero-turn mowers in the world with full suspension, Ferris models including the new, compact 400S, launched in 2018, and the EFI Petrol engine powered IS®3200Z, were proudly on display alongside popular stand-on and pedestrian Ferris machines.

Launching at SALTEX was the new Ferris ISX®800Z, a 27hp petrol engine zero-turn mower with 52” rear-discharge deck, which garnered much interest throughout the show. The real innovations in the ISX®800Z were clear for all to see, introducing a new-to-the-industry double wishbone suspension system for an even smoother ride, as well as double belt drive system under the deck for extreme reliability and extended belt life. 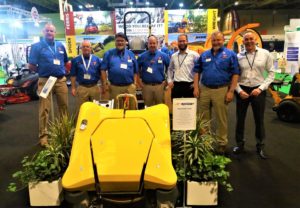 Also launched at the event was the new prototype X Line from Spider, their smallest commercial mower to date at just 1m3 with an integrated winch enabling mowing on slopes and dangerous terrain up to 55°.

Displayed on an angled stand, visitors were able to see the X Line in detail and up close, before it officially enters the market in the UK from Spring 2019 onwards.

Other models on display included the ever-popular Spider ILD01 and low-profile 2SGS, designed for mowing under and around solar panels. 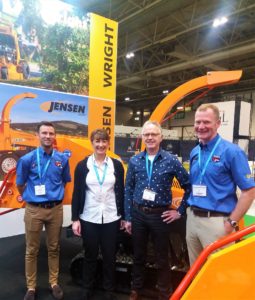 From Jensen, the original woodchipper brand established in Germany in 1884, visitors were presented with a selection of 3 popular chippers from the range including the A530L petrol towed machine, which at just 750kg can be towed with a standard, full UK driving licence.

The A530L Diesel model was also highly popular at the show, alongside the exciting A530XL tracked chipper, which with a 150mm capacity and powerful 37hp diesel engine can make light work of timber and brash, clearing up to 15m3 per hour.

The Jensen tracked system which can come either as fixed, adjustable or independently adjustable ‘Spider’ tracks, offers unrivalled stability and access for those harder-to-reach spaces such as slopes, embankments, uneven or unstable terrain. 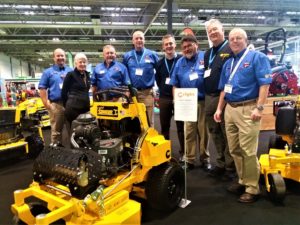 Finally, visitors were welcomed to by representatives from the Wright team, who flew over from the USA specially, to see a range of Wright stander mowers including the Sport I and Stander I.
Wright produced the world’s first stander mowers in 1997 and are the leading manufacturer of high quality, stand-on mowers in the world. Visitors were interested to stand and sit on the Wright mowers, testing the comfort and user-friendliness, as well as the easy-to-use spring-loaded height of cut adjuster which surprised guests with its effortless transition ability.

Judith Ross, Regional Sales and Marketing Manager at Wright, commented: “Working with the Machinery Imports sales team at SALTEX 2018 was a productive and informative experience. Wright values our partnership with Machinery Imports as a supplier of premium commercial equipment in the UK. SALTEX provides an important venue for industry-wide sharing of best practices and services in the green industry.”

The team were pleased to not only meet new and existing customers and dealers but also showcase the brands on film with the teams from SALTEX TV and Turf Matters who both visited the stand during the event. Not only that, popular YouTuber John Ryan who set up the Lawncare Legends social groups for groundcare professionals took time to visit the stand and film some of the machinery for his upcoming projects.

Machinery Imports Divisional Director, Tim Lane, was really pleased with the success of the show for the business, commenting:

“We were delighted to attend SALTEX again this year supporting the IOG and hosting a large stand space encompassing all four of our premium brands. The Machinery Imports team worked tirelessly throughout the event to highlight the exceptional range of machinery we have available to meet the customers’ every need, as well as showcasing our new innovations to the market through product launches from Spider and Ferris.

We are looking forward to speaking with all the stand visitors again over the coming weeks and months at demonstrations and meetings to discuss working together further in 2019.”