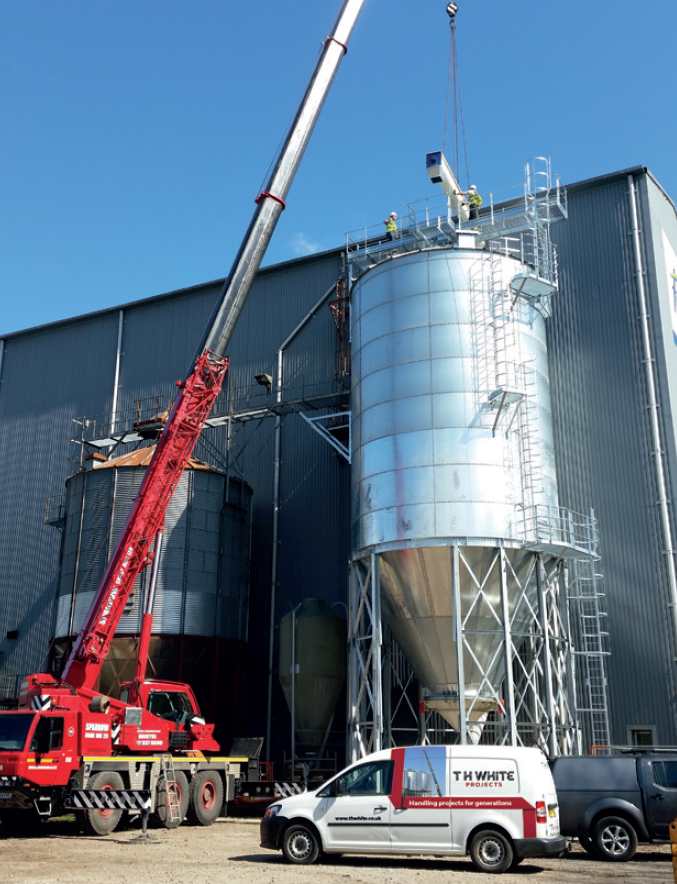 Located near Royal Portbury Dock on the Severn Estuary is the ForFarmers Animal Feed Compounding Mill.

Early in 2016 the T H WHITE Projects Division was awarded a contract to upgrade some of the silo storage on site. This included the refurbishment of an existing silo, removal of another, as well as the installation of a new steel silo with associated handling equipment and controls .

The old arrangement on site had the two original hopper-bottom corrugated silos located alongside each other as shown on the photograph, so with one unit dismantled and removed from its base there was a sufficient area available to undertake the project on the existing foundations.

Alongside the refurbished silo a new and larger capacity vessel was carefully planned into the solution. The additional storage involved a 348-tonne capacity hopper bottom silo supported on some heavy duty steelwork and hip ring, with a cylinder tank diameter of 7m which, when erected, would leave the new silo standing some 20m high alongside the existing version .

As the storage silo holds meals which have restrictive material flow characteristics, a 60 degree cone with a vibratory bin activator was included to ensure effective discharge of the material within the smooth-walled steel plate silo. Filling and discharge from the silo is rated at 50 tonnes per hour and has been connected to the existing production facility using a series of new screw conveyors.

After progressing through the design, procurement and manufacturing stages of the contract, installation and commissioning of the new system

was successfully completed, thus enabling handover to the customer in May.