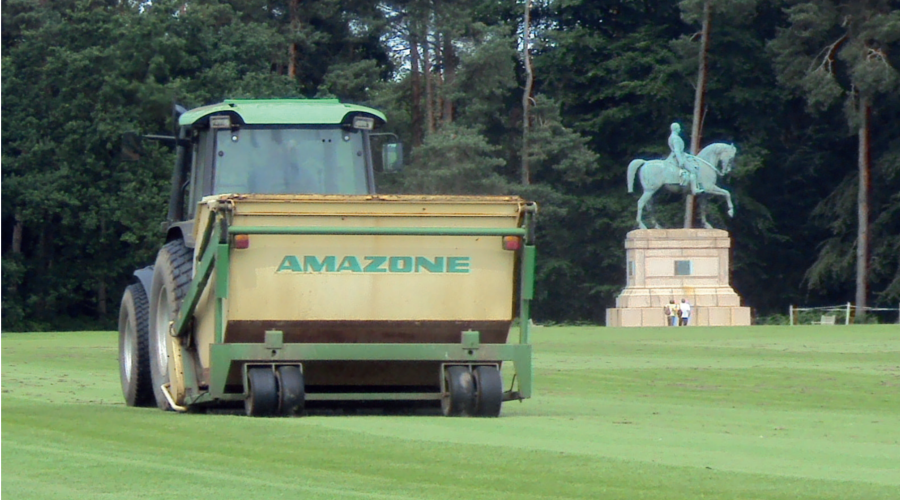 The Guards Polo Club – one of the most illustrious polo venues in the world – is based at Smiths Lawn, Windsor Great Park. It maintains 10 polo pitches spread across 53 hectares, plus – at nearby Flemish Farm – 120 stables, an exercise track and a practice ground.

With the playing season running from April through to mid-September, the Club hosts a sequence of prestigious events throughout the summer alongside hundreds of day-to-day games. These leading events include the Hurlingham Polo Association’s International Day, the Duke of Wellington trophy and climaxing with the Nations Cup in September.

With 130 acres of grass subject to hard usage, the Grounds Team of 14 headed by Head Groundsman Peter Svoboda has its work cut out. After every match a special ‘divot’ team goes on the pitch to press back the divots by hand. This is then followed up by a manual repair using a 7.5 tonne mix of top soil and grass seed per pitch.

“We are constantly trying to achieve a pitch that is as near perfect as possible,” explained Mr Svoboda. “We need good grass coverage plus adequate drainage to improve water infiltration and keep the pitches playable when wet, but also we need to irrigate when it’s too dry.

“One thing the players and spectators expect is a beautifully manicured, striped finish. To achieve that we use a fleet of three Amazone GHS 210 Groundkeeper Jumbos, supplied and supported by T H WHITE Groundcare. These incredible machines are superb for a whole range of jobs – they will mow, collect, scarify and roll – but it’s the finish that stands out and we have had many compliments this year.”

Due to the area that has to be covered, much of the mowing is done with 6m rotary mowers, but the Amazone machines are used to collect the clippings, also scarifying where necessary and are out on the pitches at least every other day. With the grass this year having grown profusely, the Jumbo 210s have been working flat-out picking up and taking the cut material away to a composting area as well as mowing the outer pitch sides.

Adequate surface porosity is aided by 6,000 tonnes of sand being applied annually in three applications, followed immediately by a run with the Verti Drain to ensure some deep down incorporation. Over the season power corers are also used. “We have tried many ways to collect the cores but the most effective has been to use our Amazone GHS 210 Groundkeeper Jumbo,” adds Mr. Svoboda.

The Groundkeepers aren’t the only Amazone machines used at the Guards Polo Club. As if the amount of grass growing naturally is not enough, Mr. Svoboda uses liquid fertiliser applied via a sprayer, as well as two passes with a slow release granular fertiliser applied with a 2,500 litre capacity Amazone ZA-M Profis 24m spreader. “We needed to put the stuff on more accurately than we were and so we bought into the weigh-cell technology of the ZA-M, which not only gives us an excellent spread pattern, but also the correct spread rate down to the last kilogram; it’s expensive so we try and make the best use of it.”