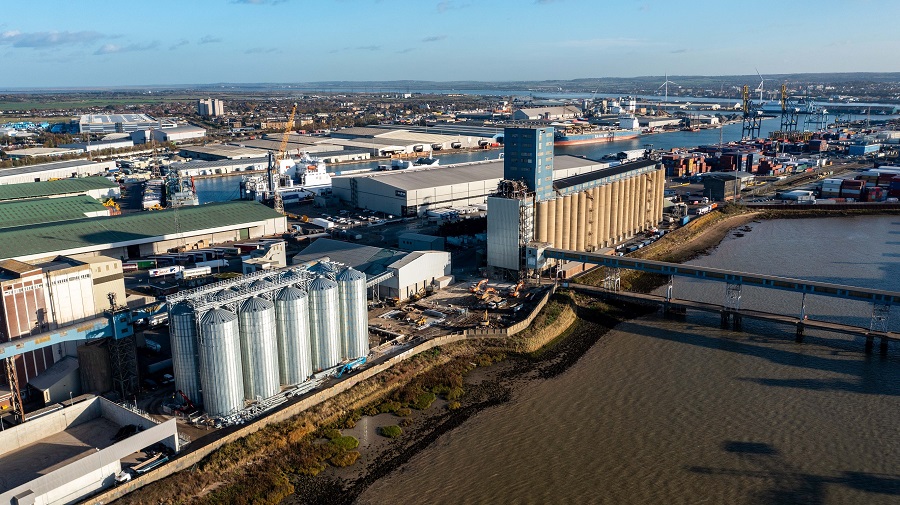 In September 2018 a steel silo at the Tilbury Grain Terminal collapsed.  A subsequent dust explosion and fire in the concrete silos followed in July 2020 interrupting a major reconstruction programme to rebuild the corrugated grain storage facility.  T H WHITE Projects is pleased to announce the rebuild is progressing to plan within the Port of Tilbury, Essex, and its initial Principal Designer & Contractor appointment for phase one of the works has been extended.

Located on the banks of the River Thames, the Tilbury Grain Terminal handles approximately two million tonnes of cereals, pulses and beans per annum. Dating from the 1960s, it plays a significant role in ensuring the global food supply chain is reliably supported with ‘on-time’ quality materials.

The aim of the project programme is to restore the terminal to its original function as the largest import and export operation in the UK. The untimely dust explosion in the adjacent concrete Silo Block 4 initially hampered work on steel Silo 3, causing a short delay. Despite inclement weather, progress on Silo 3 has gone well with all the 10 silo bases modified with a new concrete slab to accept the 11m diameter, 30m high corrugated steel silos.

Arranged in two rows of five, the silos have now – with the use of a specialized hydraulic jacking mechanism – been successfully erected together with 3m wide overhead gantries ready to accept the 700tph high capacity 800mm wide chain conveyors.

As the appointed Principal Designer & Contractor on phase one of the works, T H WHITE Projects has now been awarded an extension to the contract with the addition of a transfer reclaim conveying and elevating system which will facilitate grain handling operations within the terminal while the concrete Silo Block 4 is being reconstructed. This enables cereals to be transferred at a rate of 500tph from the main terminal headhouse and turn heads, across to the new steel silos, the 17,000 tonne bulk store and the two local customer flour milling operations of ADM & Allied Mills using the existing high level mill gallery arrangement.

The 650tph rated reclaim system will involve a 100m run of double deck chain conveyor gantry steelwork, with a short transfer tower at one end near the centre house interface, as well as a 40m high main elevator transfer tower at the other end. This will connect to the existing mill gallery and, from the head of the elevator, will follow the described route destinations.

The additional bulk materials handling system will be designed, manufactured and installed in tandem with the Silo 3 project so that it can be commissioned within the same period.

With the addition of the transfer reclaim system there is a significant amount of civil work to undertake before the installation of the various towers, gantry steelwork, MCC and transformers. This includes ground excavations, piling, construction of reinforced concrete bases and drainage works, all of which are now under way on site.

During demolition of the concrete silos and removal of the rubble and damaged materials, the importance of site safety and CDM boundary interface between active contractors has been continuously monitored and addressed.

The 20,000 tonne steel silo grain storage facility, as well as the connecting transfer reclaim conveying and elevating system, is due to be fully completed, commissioned and handed over to the Port of Tilbury London Ltd in mid-2022.

Further updates on progress, interface and supporting project photographs will be released by T H WHITE Projects in due course.

T H WHITE Projects specialises in cereal processing & storage solutions of all sizes, small to large commercial/industrial bulk facilities, taking each project from conception to completion. If you have a scheme you would like to talk about, please do contact us on 01380 723040 or email projects@thwhite.co.uk.