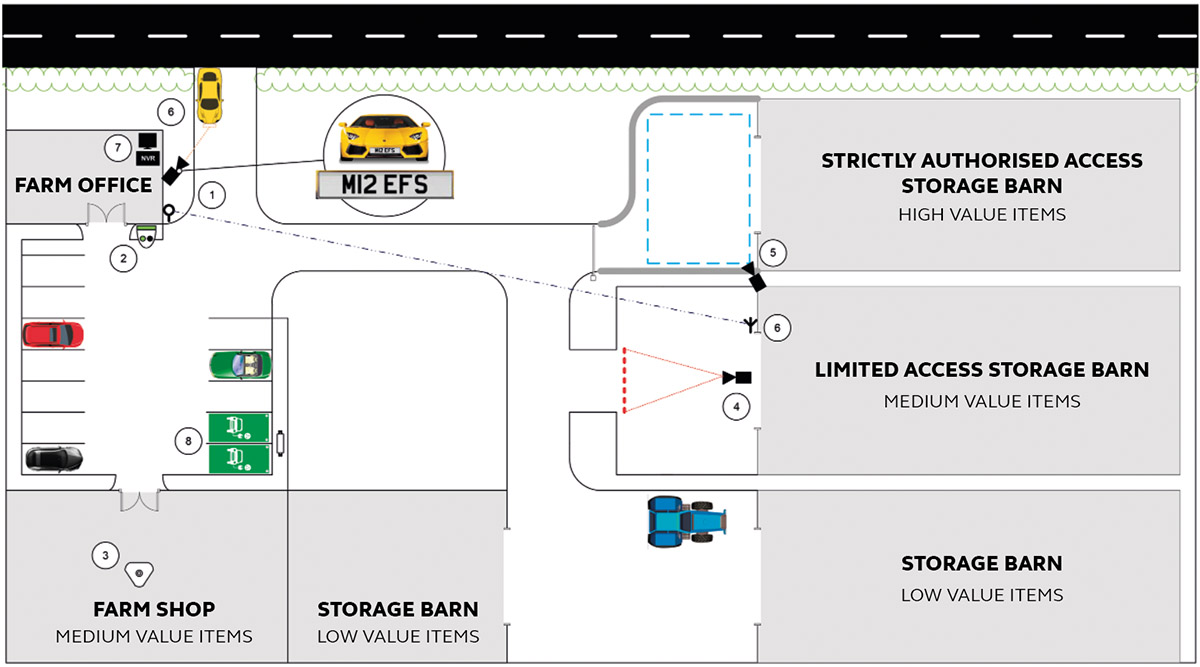 To assist in the fight against rural crime T H WHITE Energy, Fire & Security has designed a multi-camera smart CCTV system which will alert customers to intrusion and trespass on the farm.

To illustrate how the system would work our Energy, Fire & Security team has taken the case of a hypothetical farm, shown in the diagram below. In this scheme, five cameras cover key areas of the farm site. Potential intruders and trespassers are detected and, using state-of-the-art analytic software, notifications of activity are provided directly to the customer’s PC or to any iOS or Android device using an app.

The cameras are high definition Hikvision ‘bullet’ units, designed to perform well in bright or dull lighting. The default image is colour, and the cameras will continue to produce colour images, even in low light. But when light levels drop further, the cameras switch to producing monochrome images with the on-board infrared LEDs lighting the scene. Some of the cameras are designed to produce a general view of certain areas including coverage of the car park, while others are set up via the analytics software to focus on sensitive areas.

An Automatic Number Plate Recognition (ANPR) camera at the main entrance (1) captures registration numbers of vehicles coming and going from site. The software can then automatically check the recorded number plates to identify if any are ‘blacklisted’ so that notifications can be sent to the customer.

A turret dome camera (2) is used to monitor the car park. A turret dome is used because the camera is in a prominent position and is more discreet than a bullet camera. These are preferred to standard domes when installed in an outdoor location because they are less affected by glare from housing or street lighting etc. Also, the infrared LEDs are positioned separately from the camera lens which draws insects and IR glare away from the camera lens.

For the farm shop a fisheye camera (3) is installed in a central position. These cameras have a clever lens which records the full 360° scene as a warped image, but up to four channels can be used to provide de-warped images. So, there are effectively four separate cameras running constantly even though there is only a single lens in a single housing. The 360° coverage also allows the customer to pan, tilt and zoom around the scene.

An intrusion zone feature is enabled on the bullet camera viewing the yard area outside the storage unit for high value items (5). A virtual area is drawn on the camera image and set up as an intrusion zone. If a person or vehicle is identified in this area outside permitted hours, a notification is generated.

Data is sent over Cat6 cables (6) to and from the cameras where cable runs are practical. Two of the cameras are on a separate unit where cable runs aren’t possible, so wireless data transmission is an excellent solution. In this example we are using a wireless transmitter and receiver connected to data switches to transmit the images back to the recording equipment.

The network video recorder (NVR, 7) is a unit that enables images to be viewed, processed and recorded. It is connected to the customer’s network to allow the software to be used for both remote viewing and configuration of the system. The NVR features a monitor for viewing live or recorded images.  This smart unit uses analytics to filter out false alarms and identify when a human target has crossed a line or entered a prohibited area. When that happens the NVR will send an alert to the customer who can react by viewing the footage or by going to investigate. An added extra in this example installation is the electric vehicle charging point (8).

This scheme is just an example – there are many options that can be tailored to the site and specifics of any farm, estate or commercial premises and T H WHITE will design a bespoke installation. To hear more please call our Energy, Fire & Security team on 01380 726656.