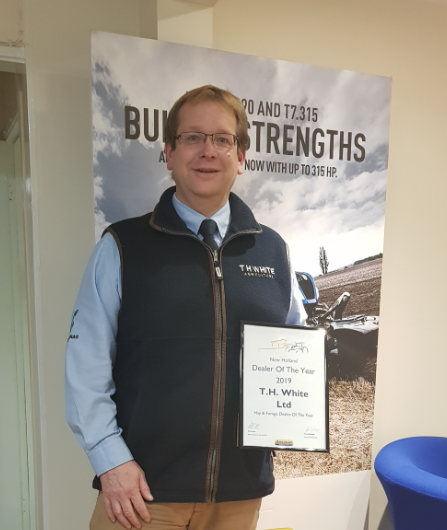 T H WHITE has been named New Holland Hay & Forage Dealer of the Year for the second year running.

The award was announced at the New Holland Dealer Conference held at the Imperial War Museum, Duxford on 14 January. During the conference the T H WHITE team received a number of mentions.  They were positioned third for overall ‘Dealer service’ performance throughout 2019 and fourth in the ‘Dealer of the Year’ performance league tables.  But most notably three of the top ten tractor sales representatives in the UK were selling from T H WHITE. Well done to Ben Linton, Andy Taylor and Ryan Lanfear.

Agricultural Director David Rapkins said: “Since joining T H WHITE I’ve been inspired by the passion and commitment demonstrated by our high calibre staff. Their knowledge and dedication is outstanding and this award validates that.”