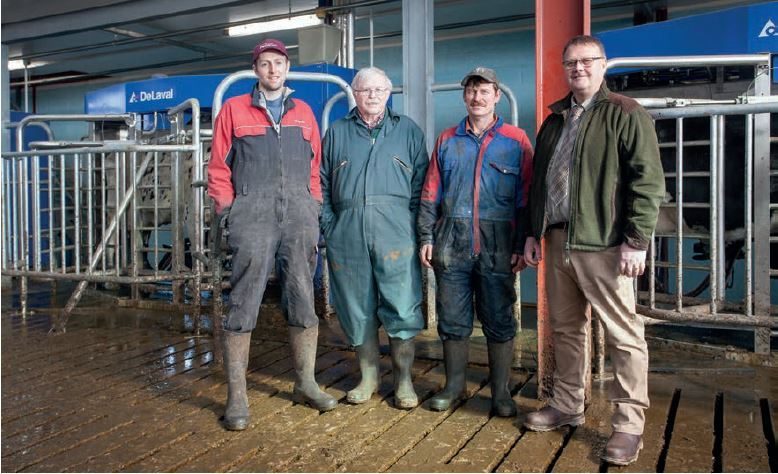 There have been many far-reaching changes since the Norris family arrived at Sandys Hill Farm near Frome 63 years ago, but the latest chapter in the development of this dairy business is set to have a bigger impact than anything that has gone before. In mid-February this year milking on the farm was switched to four DeLaval robotic units with associated milking control and feed systems installed by T H WHITE.

Back in 1952 the family had just 16 Shorthorns which they milked by hand. In those early days Bob Norris worked with with his father and mother on the farm, being joined later by his brother Phil who left to go to university in 1970. The third brother, Dan, left school in 1979 and also started work on the farm. Gradually, the size of the herd was increased to today’s total of 220 cows, 195 of which are in milk.

“In 1994 we put in a DeLaval Blue Diamond tandem 2×5 stainless steel parlour which was perfect when we had 120-150 cows,” said Dan. “The parlour still had many years of life left in it, but now, with 195 cows being milked, the throughput was slow – it was taking 3½ hours twice a day plus washing time. We are all getting older and even though Bob’s son Jim has joined us in running the farm, he has suffered from hip problems. We all thought it was time to try and simplify our workload to give us and our wives – Jane, Emma and Pam – a better lifestyle cutting out the anti-social working hours.” These were the factors that led the Norrises to consider robotic milking.

At that point Phil, who had retired from a career as a defence engineer, returned to help on the farm while Jim had a hip operation, also contributing investment to the robotic milking project. “I was really pleased to be back,” he said, “and we started by looking at options from several manufacturers. In the end the DeLaval VMS (Voluntary Milking System) recommended by T H WHITE – who are very local to us in Frome – stood out above the competition.” Theoretically the farm could have managed with three DeLaval VMS units, but it was decided to invest for the future by going for four. “With the extra unit the cows can be milked whenever they want. Since we started using VMS the cows are being milked almost three times a day on average and we are aiming for 11,500 litres from each cow. With a capacity of around 55 cows per robot we have the scope to increase the size of the herd which could help with production economics against a background of uncertain milk prices,” Jim added.

The new VMS units were installed in conjunction with the DeLaval Milk-First cow traffic management system. This uses a selection gate to guide and pre-select cows for milking. The gate’s software determines whether or not a cow has permission to milk based on her expected yield, hours since last milking, lactation number and stage of lactation. This ensures that when a cow visits the robot she will be milked or diverted – eliminating refusals and increasing station capacity. The motivation for the cows is feeding, and feed concentrations in the milking units are used to tempt them in. Cows are pre-selected on their way from the stalls to the feed troughs – if they have milking permissions, they will enter the commitment pen to go through the robot; without milking permissions, they can simply go through the feed lane to eat. Dairy management is entrusted to DeLaval DelPro software which monitors all aspects of cow health, feeding, milk yield and reproduction, providing all the information needed to increase efficiency and profitability. When the time came to switch from the old parlour to the VMS system the Norrises helped to acclimatise the herd with a week’s training during which the cows were incentivised with feed to follow the logical paths through the traffic lanes. “Almost all of them took to it very easily,” said Jim. “Most of the cows stood still in the VMS stalls and very few kicked the milking lines off. Because the cows are guided, less fetching is needed and even cows with special needs are automatically diverted into a holding pen ready for when the vet visits. It has really cut down our workload.”

As might be expected with an installation of this size and complexity there were some minor teething issues. “At first some of the gates were acting prematurely and ‘pinching’ the cows, but with T H WHITE virtually on our doorstep their engineers were here straight away to address the problem.

“The whole system is proving its worth already, giving us a much better quality of life. If something in the system or one of the cows does need our attention we are alerted via smartphone messages whether we are at home, at the shops or on holiday anywhere in the world. Things can be dealt with promptly and we only have to go out when it’s really necessary. That really is luxury for a dairy farmer!”

If you are considering changing the way you milk or manage your herd it really is worth having a chat to the dairy team at T H WHITE on 01373 465941. We can help make your operation more efficient and profitable, as well as giving you more free time!