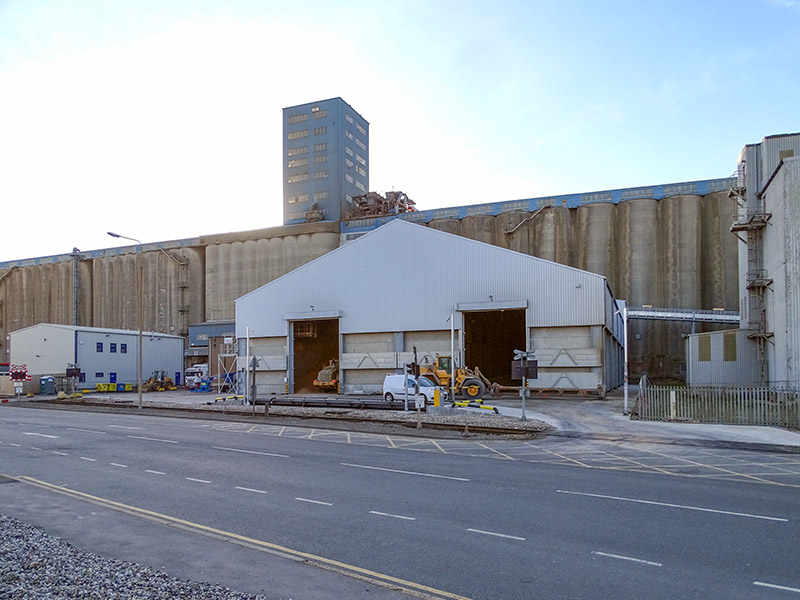 The Port of Tilbury London Ltd, part of Forth Ports PLC, has now added a further 16,000 tonnes of cereal storage to its existing grain terminal on the banks of the River Thames.
As one of the  largest facilities of its kind in the UK, annually handling more than 1.4 million tonnes of combinable crops for both the import & export markets, this project represents a significant investment by The Port of Tilbury in one of its major assets which was originally constructed back in the sixties. The previous operating capacity – 120,000 tonnes of silo storage – has been augmented  by a brand new flat store constructed adjacent to the existing grain terminal.
Principal contractor for the project was Colchester-based Cadman Construction, with T H WHITE Projects acting as the mechanical and electrical contractor, both parties working closely with the Port as principal designer for the new facility.
The 16,000 tonne flat store is contained in a 66m x 36m single span building with two main grain storage bunker areas surrounded by concrete retaining walls to a height of 6.5m, supported from the in-situ cast foundation which itself has the potential for the addition of future crop aeration.
At the front a below-ground flush weighbridge was installed. At the rear of the building a MCC plant room was constructed to house the electrical control equipment in a clean, dust-free operating environment. This has a communications link with the main control room where the operating process control and monitoring software had been upgraded to encompass the enlarged facility.
T H WHITE heavy duty fabricated grain doors are used to maximise the available storage capacity, offering the ability to fill right up to the doors and protect the main entrance areas.
Alongside the existing concrete grain terminal, the mill gallery belt conveying system feeds the adjacent Allied & ADM flour mills which run in parallel to the Thames and the steel grain silos.
Apart from the option of tipping directly into the flat store by truck, the main automated feed route is via one of the mill gallery transfer towers which has been modified to divert the flow of grain down a reinforced chute with replaceable wear plates, into a new high capacity 500tph chain conveyor which runs in an overhead gantry across to the store. Having entered the roof space of the flat store, the chain conveyor has the ability via its dischargeslide gates to transfer the conveyed material into one of the two high level belt conveyors which operate down the length of the two storage bunkers, filling the area through the travelling tripper carriage on a controlled basis in conjunction with a festoon cable control system.
All mechanical and electrical equipment installed complied fully with the ATEX requirements of the project, whilst safe access for maintenance was ensured in the design of the secondary steelwork around the bulk materials handling equipment.
The project programme has now been successfully completed and handed to the Port for operational use, currently scheduled for final commissioning with the automated transfer of grain from the terminal by the time this appears in print.
T H WHITE Projects specialises in cereal processing and storage solutions of all sizes, from small farm installations to large commercial/industrial bulk facilities , taking each project from conception to completion. If you have a scheme you would like to talk about, please do contact us on 01380 723040 or email
projects@thwhite.co.uk
Projects
Share this post:
T H WHITEADDITIONAL STORAGE IN PORT EXPANSION04.01.2019