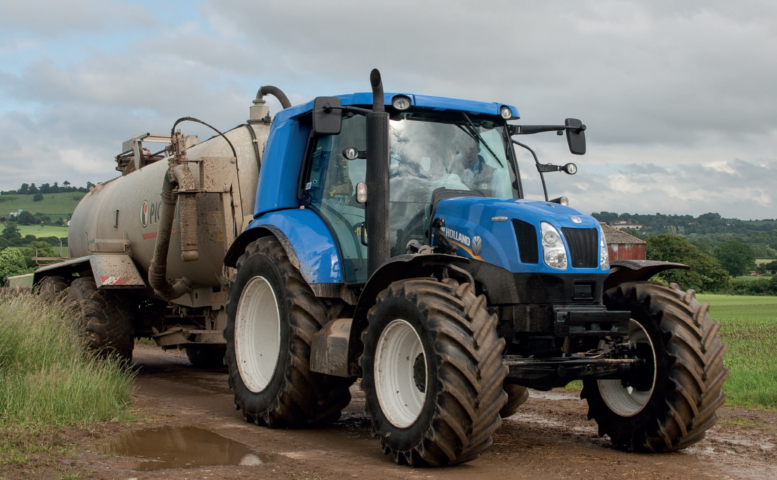 Following its unveiling in Italy, New Holland’s second generation prototype T6.180 Methane Power tractor was shipped to the UK where, in the custody of T H WHITE, it was taken for testing by journalists and farmers at Wyke Farms in Somerset.

Developed by New Holland as a 100 per cent sustainable solution to increasing fuel costs, the new tractor has been designed to emit 80 per cent fewer pollutants than a conventional diesel tractor, as well as having the potential to deliver significant fuel cost savings with no Ad Blue required either. Although still at the prototype stage, the methane-powered tractor is expected to cost roughly the same as a diesel tractor when it goes into production.

Wyke Farms – one of the UK’s biggest cheddar producers – was chosen for the demonstrations as it is already energy-independent thanks to three large anaerobic digesters which process waste from the farm’s 1,000 dairy cows, local cider waste and other suitable material. The resulting methane is used to power the farm’s boilers and generate electricity for the farm and the cheese factory. Excess gas is sold back to the grid to serve the local community. 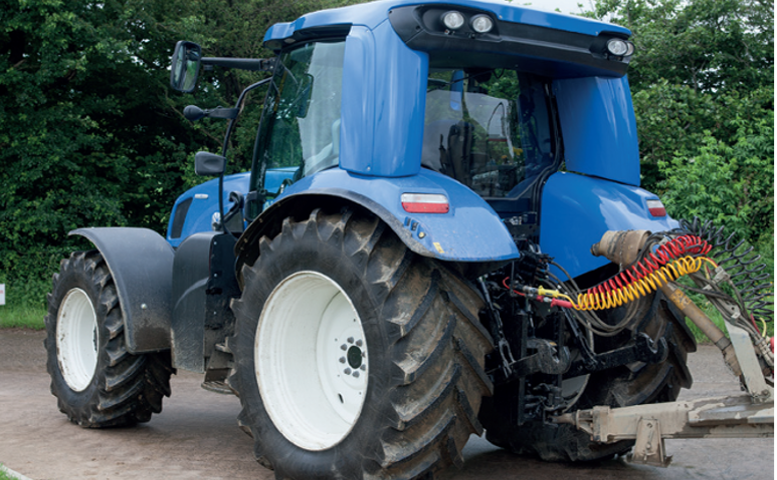 With the addition of an on-site compressing plant Wyke Farms could in future run their tankers on biogas – as well as tractors, potentially slashing the £4,000 per month spent on red diesel by 25 to 40 per cent.

The T6.180 Methane Power tractor uses state-of-the-art engine technologies supplemented by a small three-way catalytic converter, all housed within a standard tractor chassis and cab. Nine biogas tanks have been integrated in the tractor’s bodywork which will hold 300L (52kg) of compressed methane – enough for around six hours of work depending on activity and load, while exceeding the current Tier 4B emissions legislation.

On test at Wyke Farms the tractor was hauling a fully-loaded tanker, the conmbination weighing in at 27 tonnes.

Roger Clothier, Wyke Farms’ Director who drove the prototype tractor said: “My first impression is that this looks and feels just like a normal tractor. It was perhaps a little slower to get off the line, but once moving the tractor came alive. Engine braking downhill was good and there was plenty of power in the mid-range and top-end with no torque issues when going uphill – it drove just like a diesel.” 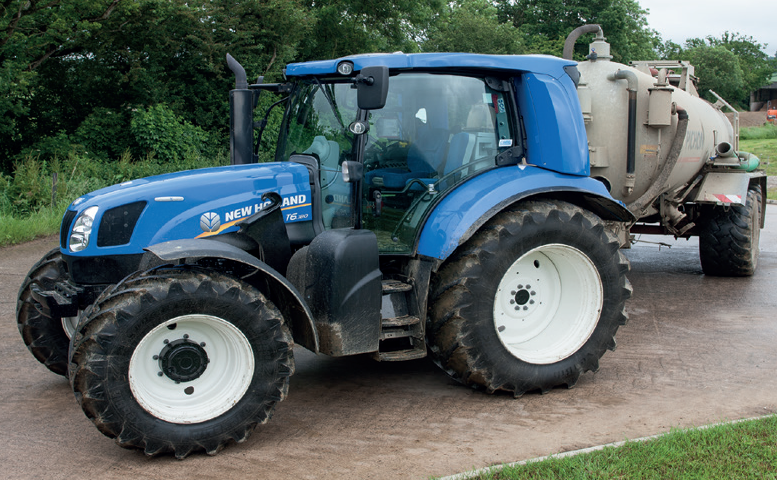 The main interest for methane-powered tractors will probably come from farms with their own AD plants. These farms tend to run 200hp-plus tractors and the T6.180 Methane Power could be a little underpowered so development work is likely to include higher power outputs.

Farms without a biogas plant could avoid the expense of additional plant investment by using the gas from the CNG distribution network, while there is also the possibility that larger enterprises, such as Wyke Farms, may in due course provide a centralised filling point for the local area, as long as there was sufficient demand from neighbouring farmers and hauliers running methane-powered vehicles.

While there is still much development work to do on the Clean Energy project, the technology has made huge advances and there’s little doubt that the future will be green.

If you would like to keep in touch with New Holland’s Clean Energy Leader programme, just register your interest with Ben Willcox at T H WHITE Agriculture on 01373 465941, or email bjw@thwhite.co.uk.