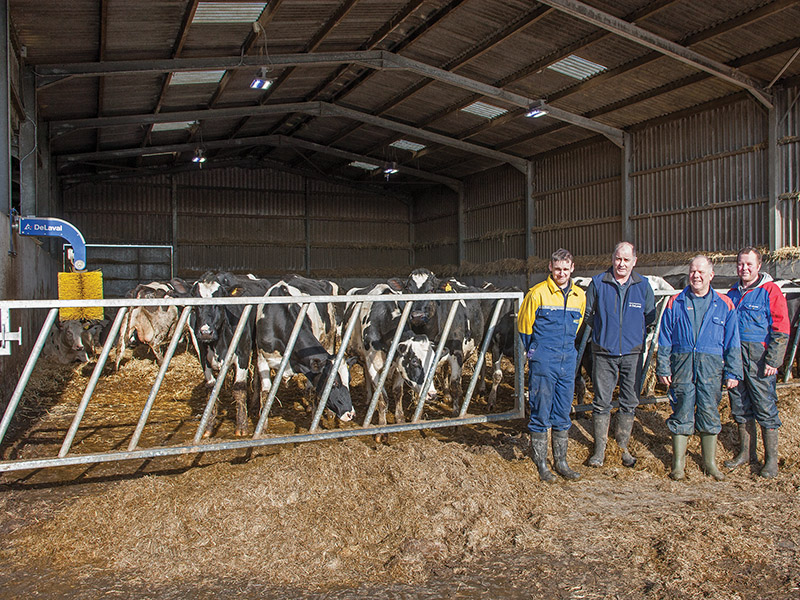 Dairy farmers have known for a long time that giving cows more light increases milk yield. Studies have shown that exposing cows to16 hours of light each day will cause the pineal gland to produce less melatonin, in turn leading to increased feed intake and milk production. The uplift can be between 5% and 16% (averaging 8%) so it’s an increase well worth having. Until recently, however, the energy cost of providing the extra lighting made the benefits questionable.

To see how things have changed we visited the Morgans’ farm near Llantwit Major in South Glamorgan where T H WHITE installed DeLaval cow LED lighting in December. 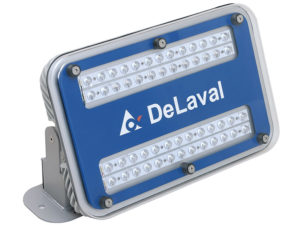 The Morgans’ farm is in a beautiful position on hills overlooking the Bristol Channel. During the summer months the cows graze on pastures which form part of the 300-acre mixed farm, but in winter it’s a different story: “The wind here howls straight off the Atlantic – there’s literally nothing between here and America to shelter us,” says David Morgan. “We house the cows in the winter to give them some protection but obviously we still want to get the best milk yields that we can. We had been thinking about using lighting for a while to increase yields and we started talking to T H WHITE in the autumn.”

To make the lighting effective you can’t just use any light. Cows see a different part of the visible spectrum from humans so it’s important not only to achieve the correct lux levels (brightness of illumination) but also the right colour temperature. Most LED lighting systems in use today were designed for factories – not the high ceilings of barns – and so use a lot of energy to achieve the right light levels for the cows. DeLaval, however, has taken an entirely new approach in designing its cow LED units.

Only in 2014 were efficient blue light-emitting diodes invented (awarded the 2014 Nobel Prize for Physics) and DeLaval has used these together with additional optical lenses to achieve an even ‘bat wing’ light spread. The really clever part is that the DeLaval units deliver light at three different levels – ‘Herd Light’ for the cows’ eyes, ‘Work Light’ for farmers’ eyes, and ‘Night Light’ for the 8-hour dark period when the cows rest but farmers still need to work safely. By ‘switching off’ the light that the cows can’t see and implementing automatic dimming as natural light levels increase, power consumption can be reduced by up to 75 per cent.

“When the DeLaval cow LEDs were installed the difference was almost immediate,” says David. “We are seeing an increase of around 3 litres per cow – that’s money well spent, I’d say!”