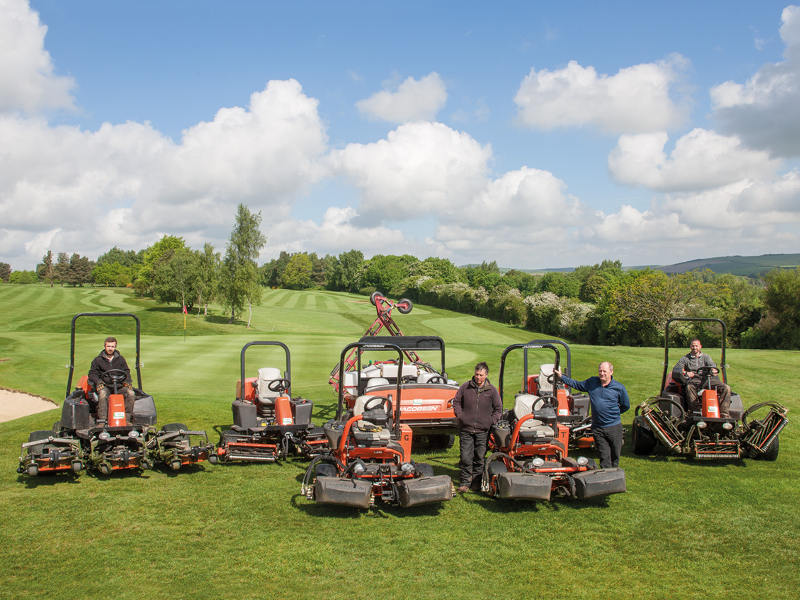 We are fortunate to have so many wonderful golf courses in the areas served by T H WHITE Groundcare, but maybe Marlborough Golf Club has an unfair advantage.

The ancient market town of Marlborough sits in the valley of the River Kennet amid the sweeping North Wessex Downs – a designated area of Outstanding Natural Beauty. Up the hill from the popular town with its bustling shops and restaurants lies Marlborough Common where, in 1888, the Golf Club was established with a 9-hole course. In 1971 an agreement was reached with the local authority to use more land on Marlborough Common and the course was extended to 18 holes on a 117-acre site, today beautifully maintained by head greenkeeper Robin Greaves and his team.

Like many clubs these days, Marlborough has recognised the benefits of obtaining its groundcare equipment through a lease hire package which allows costs to be controlled as well as bringing the certainty of a five-year equipment replacement cycle.

“With more than 100 acres to look after and just five of us on the team, it’s fair to say that the kit is intensively used and comes in for quite a bit of rough treatment,” says Robin. “That makes it very important to have a dealer you can rely on. Whenever we have needed support the T H WHITE team has been on the case straight away, keeping us in business no matter what the challenges. That’s how it has been right from the start.”

When the old lease came to an end the Club decided that for the sake of good management all options should be examined. General manager Les Trute explains: “We called in suppliers of all the major groundcare machinery brands and Robin and I had extensive demonstrations. Mike Harris from T H WHITE Groundcare brought Jacobsen’s latest machines. We could see that the quality and cut from the Jacobsen machines was comparable to anything in the business, PLUS they had a five year guarantee – something that nobody else offered.”

The deal was done and Marlborough Golf Club took seven new Jacobsen machines on a five year lease hire, including greens and tees mowers, rough and fairway mowers and a sprayer/utility vehicle.

“We are impressed with the new machines, which have proved to be reliable and more than a match for our demanding needs,” adds Robin, “and the smaller engine sizes on the larger machines have made them remarkably economic without loss of power. But the aspect that really tipped our decision was the service we get from T H WHITE Groundcare. It’s a local company that really cares about looking after customers and keeping us running even under pressure. You can’t really put a value on that – it’s priceless!”

If you are a groundcare professional and would like to know more about T H WHITE’s services, please contact any of our Groundcare branches listed on page 2.