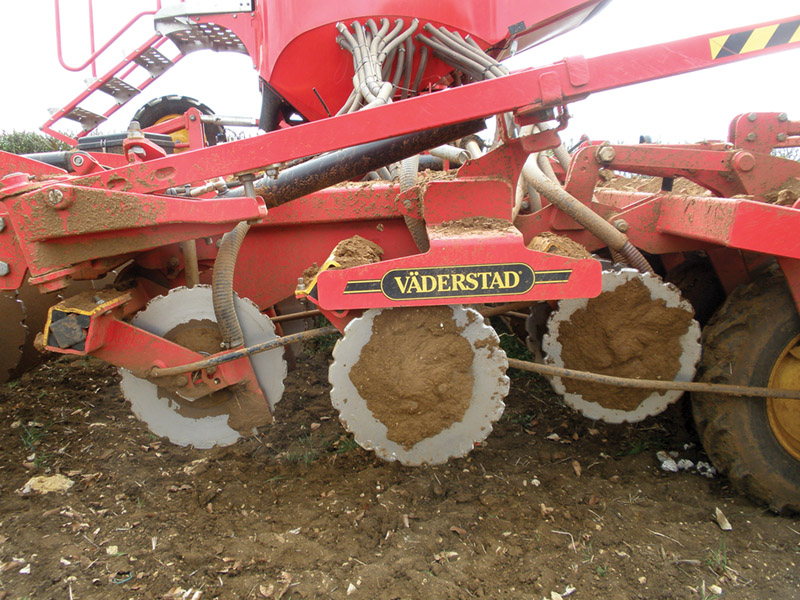 The improved residue flow from an 8m Vaderstad Rapid fitted with system aggressive discs has enabled a Cotswold Estate to sow in wetter, trashier soil conditions.

Six years ago, Ewe Pens Farm on the Bathurst Estate – operated by Cirencester Park Farms Ltd – made a policy decision to switch its machinery to a single high horsepower tractor, a big seed drill and a wider cultivator.

Farms manager Stuart Bachelor explains the reasoning: “There had been a big increase in the arable land farmed – we’d taken on another 300ha and needed the power and width of implements that would enable us to increase output, speed our work and reduce costs, as well as providing capacity for further expansion.”
His ongoing challenge is to maximise output from the free-draining Cotswold brash over limestone, which can vary in depth from 15cm to 45cm on some of the ‘better’ ground.

“Our objective is to get as much as we can from our limited soil resources and make them more resilient to spring drought. The soil offers easy working but if we don’t get rain in April and May yields can be disastrous,” Stuart explains. “Due to our altitude – 750ft above sea level – we’re colder and later in the spring. The thinness of the soil means that we need to achieve a well-established crop and get the roots down.
“Our target is to harvest the oilseed rape by the end of August and the wheat during the first fortnight in October; I believe in the maxim that ‘a seed well sown is half grown’ and it will provide competition against blackgrass and other weeds.
“We are highly aware of the need to increase organic matter and only bale straw in front of oilseed rape, the rest is chopped off the back of the combine and incorporated. And we import a lot of sewage sludge, FYM and digestate, which has also enabled us to reduce our use of triple super phosphate.”
The shallow soil has also been the primary factor behind changes in cropping. For the past four years the arable ground has been farmed in three rotations. Growing conserved fodder for a neighbouring dairy farm influences one programme, the land down to a winter wheat, maize (141ha), winter wheat, oilseed rape cycle. On the deeper brash, spring beans replace the maize, while on the thinner soils winter wheat is followed by two barley crops (either winter or spring barley), before oilseed rape
“We grow oilseed rape one in four years as, although it has a high gross margin, I think growing it too often would a only offer a short term benefit as there are the potential problems of black grass and slugs,” says Stuart. “The spring crops help us to keep on top of black grass but on the worst fields we are also meeting points requirements for the basic payment scheme using fallow and trialling a two to four-year herbal ley (grasses/clovers/sainfoin).”

‘Knock the slugs about’

A variety of techniques are used to prepare the land for sowing. Oilseed rape is sown direct into stubble with a Vaderstad TopDown cultivator and BioDrill combination. Winter wheat land is cultivated and, if needed to create a suitable seedbed and to ‘knock slugs about’, a pass is made with a 6m Vaderstad NZA spring tine.
“We try to do the majority of spring crop ploughing in September,” adds Stuart. “Some over-wintered stubbles are cultivated in February/March.” On the maize land FYM is ploughed in with a 6-furrow Kuhn before a pass with a 6m Vaderstad Rexius Twin and drilling by a contractor.
Until 2012 the primary workload was carried out with 300hp and 350hp tractors hired in from mid-August to mid-September so that heavy cultivation and the oilseed rape establishment could be done at the same time. The restructuring of the machinery fleet brought about by the additional land saw an end to the hiring-in policy and a 320hp tractor was purchased to do all the primary cultivations and sowing with a wider, 5m TopDown and a bigger, 8m Vaderstad Rapid fitted with System Aggressive discs.
“I’d had experience of the Rapid and I think the depth control and the layout of the working elements, two rows of cultivations discs, a levelling board and two banks of drilling coulters, maintains the seed depth better than tines which can have a lot of movement. It also produces more uniform establishment. The discs have the whole weight of the drill on top of them – we drill at 10 to 16kph, depending on the stone content.”

But the Rapid was not faultless. “In really wet conditions it blocked up between the two rows of coulter discs,” Mr Batchelor says. “That issue was addressed at the beginning of last year when the drill was replaced with another 8m Rapid, specified with the optional tool layout of two rows of system aggressive cultivating discs and a third bank of coulter discs in place of the levelling board. It still drills at 12cm as there are the same number of discs but as they are spread out more there is greater room for trash flow.”
The drill is also fitted with the E-Services system, which is used for variable rate seeding, rather than variable rate fertiliser, to compensate for variations in soil type and depth. “Courtyard Agriculture has scanned and zoned all the arable fields into different soil types and zones are sampled every three years. Wheat and barley seed rates vary between 300 – 450 seeds/m2.”
Although Cirencester Park Farms Ltd has used the modified Rapid for only one autumn Mr Bachelor believes the investment has been worth it. “We drilled wheat in November with no problems and by the end of February establishment looked good,” he says. At the time of writing it was too early to comment on yield but the potential is similar to the previous drill as the principle is the same, but with the flexibility to cope with wetter, trashier conditions.
Agriculture
Share this post:
T H WHITERAPID TRASH FLOW ON COTSWOLD BRASH08.01.2018