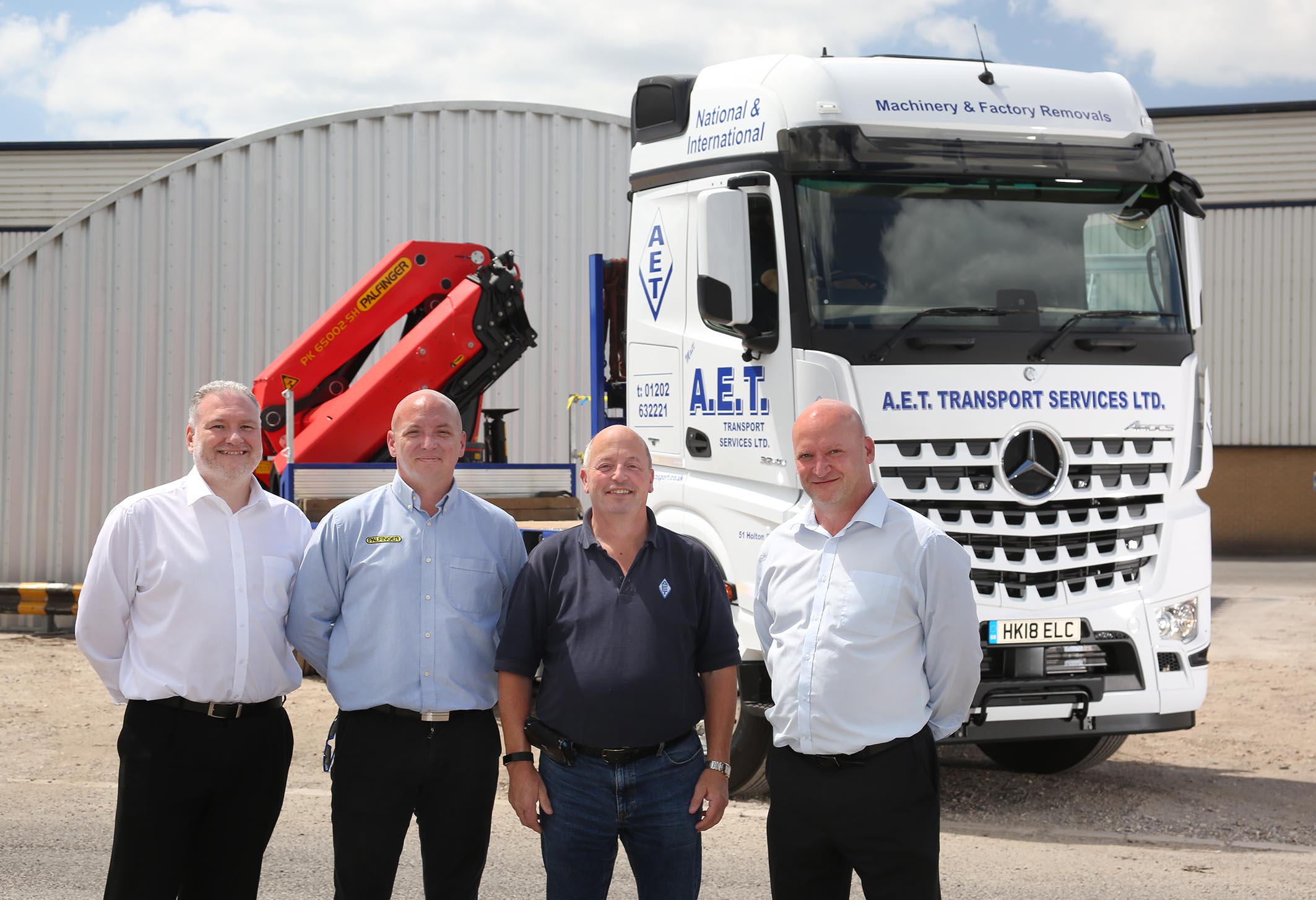 One of the biggest cranes currently fitted at the back end of a UK-registered 32-tonne chassis has just been delivered to new owner AET Transport Services.

The brand-new Mercedes-Benz Arocs 3248LK ENA eight-wheeler is one of a fleet of 66 vehicles for the Poole-based AET Group, which comprises AET Andover, Curvin Transport, Dorset Crane Hire and Eaton Transport divisions.

Since its delivery, the new Arocs truck has been assigned to the AET factory relocations team who move machinery, plant and other large consignments across the UK and Europe for customers including Airbus, Rolls-Royce, Britax and Sunseeker.

AET Group Managing Director Andrew Trotter explained: “A rear-mounted crane will always be more appropriate for some jobs, as it allows us to back into the premises and reach further.

“The truck’s rear-steer axle also gives us an excellent turning circle, which is a major advantage on some, difficult to access sites. We talked to another manufacturer which offers a chassis in the same configuration, but came down in favour of the Mercedes-Benz, not least because its axle loadings were better suited to the crane.”

The aim of the Palfinger UK team, alongside Mercedes-Benz Product Manager Ian Knight and Truck Sales Executive Steve Trevett from south coast dealer Marshall Truck & Van, was to shed as much weight as possible without compromising stability and rigidity. As a result, the low-height sub-frame was fabricated from a special high-grade folded steel plate which is stronger but lighter than a standard, off the shelf product.

The team are delighted that after having made a commitment to finish a truck with a maximum payload of 9.5 tonnes, the finished product is in fact capable of carrying 10 tonnes, all due to expert design and engineering processes from the Palfinger UK Technical and Production teams.

“I’m very pleased with that figure, as the extra half-tonne gives us a lot more flexibility,” confirmed Andrew Trotter. “An eight-wheeler which can lift 10 tonnes from the back end and then carry all of that weight is going to be a very productive addition to the fleet.”

Mark Cotton, Area Sales Manager for Palfinger UK is delighted with the outcome for his customer, “I’ve known Andrew for almost 15 years through my time in the industry and it is a pleasure working with him, especially when the result is such a successful build. I am looking forward to seeing the new truck out on the road around the South West and working with Andrew again on future projects.”