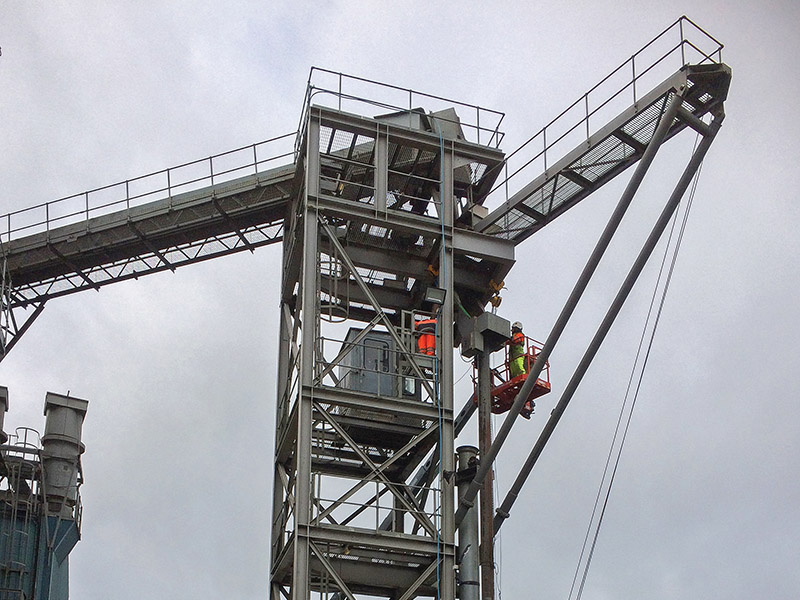 The original spout had been designed by T H White Installation Ltd and fabricated by our old manufacturing company, T H White Engineers Ltd, based at Vallis Road in Frome. After the spout had given almost four decades of excellent service, T H WHITE Projects was awarded the contract to design and manufacture a new high capacity telescopic shipping spout capable of being extended and retracted during operation as it loads the ships moored alongside the quay.

Following manufacture and inspection at the T H WHITE factory in Devizes, the completed shipping spout was despatched to the site in Shoreham. Here, the main challenge was to dismantle the original spout and install the new equipment within a weather window of opportunity, minimising operational down-time at the terminal.

The location of the actual site work was right on the water’s edge, meaning that advance planning in preparing the RAMS (Risk Assessments Method Statements) for the scope of works was extremely important. All aspects of health and safety were appraised, including the potential of falling into the water from the overhead shipping tower or its adjacent walkways. The risk of a man in the water was mitigated by the engineers being required to wear life jackets while on any access equipment, or within a 2m radius of the quay edge during the installation programme.

With the RAMS completed, officially reviewed and approved by the Shoreham Port Authority, a two week window to undertake the scheduled work was identified at the start of the year.

Bad weather in mid January delayed the initial crane lift, but once the 70 mph winds abated it was possible to use the crane and associated mobile access equipment for the first phase of work involving the disconnection and removal of the old shipping spout and its connecting chute work. The latter was repaired and relined by the client while the main works were in progress, ready for refitting. The crane lifts were supervised by a T H WHITE Projects certified site engineer, together with other members of the team qualified as CPCS slingers and signallers.

Once the original components had been removed – and the matter of a stubborn set of 1981 vintage pivot pins addressed and overcome – the project moved to the next stage of scheduled work, the lifting into position of the replacement spout followed by the connection of the relined chute work within the large structural steel tower on the quayside.

To ensure the correct fitting and alignment of the new pivot pins into the boss on the main housing for the shipping spout, it was necessary to have them machined at a specialist company local to the port. This was arranged by the installation team on a quick turnaround basis to ensure the overall programme was not affected.

After safely reconnecting the operating mechanism to the new shipping spout, the equipment was successfully commissioned and handed back to a satisfied customer, on time and ahead of schedule despite the weather conditions and additional work with the pins. A big ‘thank-you’ is due to all involved with the project, whose dedication ensured that the deadline was met with a high quality job.

T H WHITE Projects specialises in cereal processing and storage solutions of all sizes, from farm and estate installations to large commercial or industrial bulk facilities, taking each project from conception to completion. Do visit our website (www.thwhiteprojects.co.uk) to gain anoverview of our capabilities. If you have a scheme you would like to talk about, please contact us on 01380 723040, or email projects@thwhite.co.uk.

If you disable this cookie, we will not be able to save your preferences. This means that every time you visit this website you will need to enable or disable cookies again.