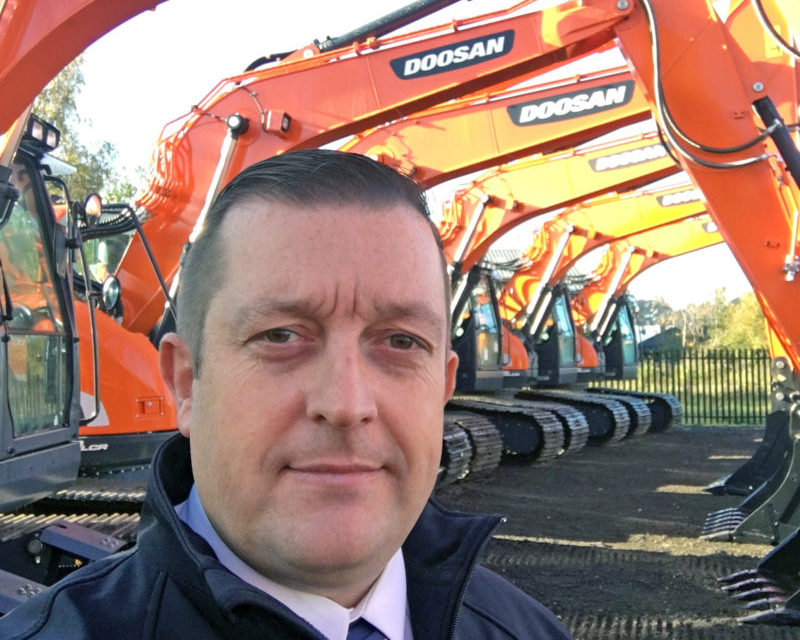 With a passion for cars, motorcycles and BIG machines, James Bird couldn’t be in a better job.  Not so long ago, while he was running his own business, he sold a used 100-ton Caterpillar face shovel excavator to a South American client in Columbia for £250,000 – certainly a landmark sale. Now, as a senior salesman with the T H WHITE Construction team at Stourport-on-Severn, his daily stock-in-trade is now somewhat more modest machinery, but he still has big opportunities with Manitou MRT rotating turret handlers, Dooosan DX800 80 tonne excavators and Doosan DA45 ADT’s.

Nevertheless, with more than 24 years’ experience in the construction industry he knows the business inside out and has first-hand experience of many major brands including Caterpillar, Volvo, Komatsu, Hitachi, Kubota, Bell, Case, Terex (now Mecalac), Manitou and Doosan.

“We are in very exciting times.” says James, “The whole construction equipment sector stands on the brink of a technological revolution. It started with GPS guided machines and laser guided tools, and now we are starting to see autonomous machines. Before long we are likely to be using machinery controlled by robots or GPS without the need for human operators at all!”

James joined Murley at Stourport in 2016 and last year the business became part of the T H WHITE Group. “There have already been some significant changes to the Construction Division with increased focus and scale being brought to the operation. So far the customers have reacted very positively and we are on a mission to deliver even better customer support with new facilities at Stourport.”

As you might expect in a 24-year career so far, James has had a few interesting and unusual experiences. “I’ll never forget one meeting I had with a customer in Iceland. We met each other in the Blue Lagoon – a naturally heated pool next to a geothermic power plant!

“One of the most satisfying things is when you can supply a customer with a machine that makes a really positive difference to their business. A few years ago I sold a brand new rotation Manitou telehandler to Jaguar Land Rover – it proved to be the ideal machine for removing robots from the production line if they go down, so is a crucial element in keeping production lines running smoothly.

“Of course, there have been many changes, even in the last few years. More constricted construction sites with less room for manoeuvrability have resulted in a trend towards zero and reduced tail swing excavators, but the most noticeable developments have been not only in the general efficiency of machines, but also operator safety. Environmental awareness has played a big part too, with fuel economy and emissions reduction being achieved at a more rapid pace than ever.”

Off duty, as well as being a petrol head, James enjoys shooting and watching his favourite football team – Nottingham Forest.