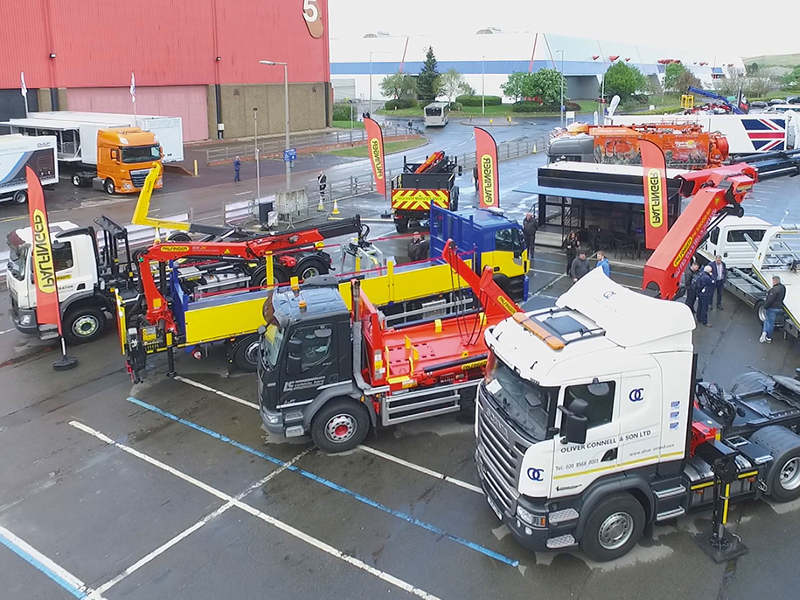 The season of  shows and open days got off to a terrific start with T H WHITE’s own open day at the Stockbridge Branch which gave visitors the opportunity to see how the business there has developed in its first year.

Verging on 100 guests attended throughout the day, the focus being on the latest Case IH equipment presented by the sales team of Stuart Crook and Simon Pratt. The flagship Axial combine harvester appeared alongside Magnum, Optum, Quadtrac and Farmall tractors. Experienced staff were also on hand from our key brands, Pottinger, Warwick, McConnel and Manitou. A series of
presentations held the attention of the audience and the whole branch, workshops and parts department were open for tours. The conversation flowed and a useful day was enjoyed by our many visitors.

At about the same time the Commercial Vehicle Show (photo above) was taking place at the NEC Birmingham at which the new Palfinger BM26 Builders Merchants crane (see White’s World May issue) made its debut. Strong interest means that this will now be test marketed. The outdoor arena made it possible to display more kit including the latest hook and skip loaders, also showcasing the body building capability of the Lorry Cranes division and underlining the added value offered by T H WHITE in supporting crane users over the lifetime of the equipment. In early May T H WHITE attended the Badminton Horse Trials where the new Honda Pioneer UTV attracted plenty of interest and once again we were able to provide a range of machinery for the organisers to use during the event. In mid-May T H WHITE Groundcare was at the ever-popular Three Counties Show at Malvern, and on 12 May the new and improved showground at Westonbirt Arboretum was the venue for the Arb Show, the first trade show for Jensen UK with T H WHITE Machinery Imports.

Over 5000 visitors attended the show over the two days, resulting in lots of interest and machine enquiries for Bill Johnston, Business Manager of Jensen UK. Bill was helped on the stand by Charles Walters, owner of Arbrep Services a UK dealer, and by two colleagues from Jensen, Germany. Of all the Jensen woodchippers on display, the new A530 Petrol created a great deal of interest. This real work horse has a large 35hp petrol engine, powering a trailed wood chipper, whilst weighing less than 750kg. Many wood chipper enquiries from the show have been passed on to the local dealers, which has already resulted in demonstrations being booked in for both May and June.

Jensen’s German manufacturing and engineering quality is evident in the most popular machine, the A530 L, which has a 6in timber capacity, with blades and an anvil that can be changed simply and quickly. This machine also has an enviable work rate, processing more than 15 cubic metres of timber per hour.