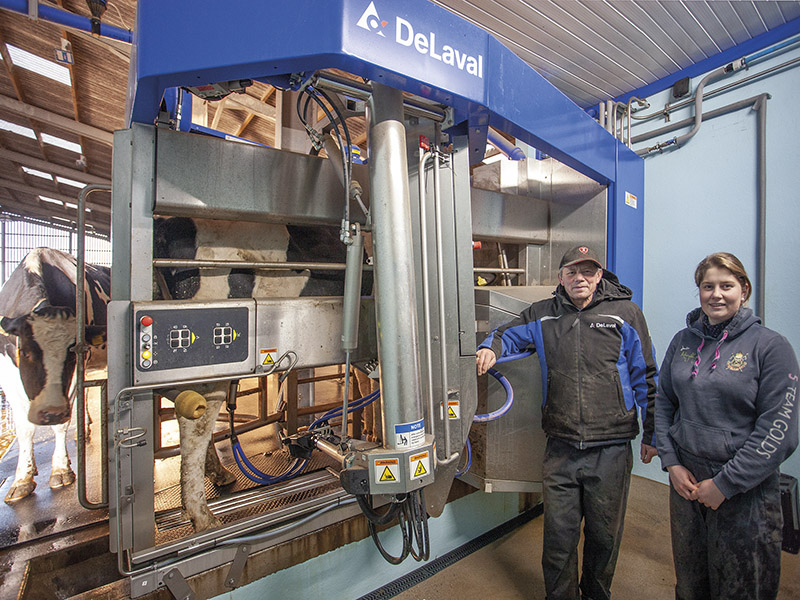 With 120 cows to milk Hugh opted for two of the latest DeLaval V300 Voluntary Milking System units which feature an incredible range of new technologies. A completely redesigned milking arm – which in many ways replicates actions of the human arm – incorporates DeLaval InSight™, a new and unique camera system. It learns and adapts to each individual udder, memorising the settings, eliminating the need for teat mapping and resulting in astonishing attachment rates of 99.8 per cent. The upshot is relaxed cows and efficient milking.

“We started to think about robotic milking because of the difficulty with labour,” says Hugh. “The V300 units essentially replace one worker, but the challenge was more about the issue of finding people prepared to do the work these days.” 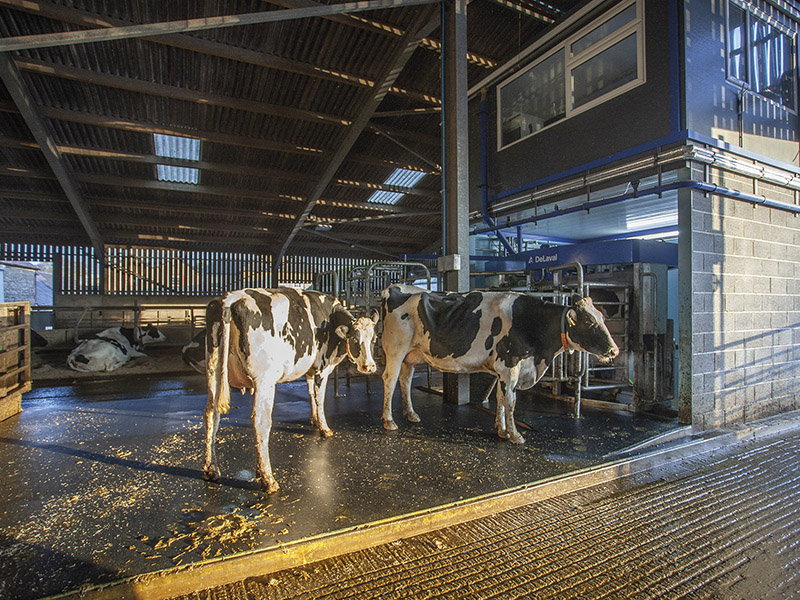 The cows have adapted well to the new regime, forming an orderly queue for the DeLaval V300!

Hugh runs the farm with his daughter Clare and wife Hilary, and is grateful for the easier working patterns that the VMS has created. “Clare and I share shifts and because we no longer have to carry out the milking it means we can spend more time on all the other tasks around the farm. It has also given us more sociable working hours and I can monitor the whole thing from my mobile phone wherever I am. The system will even send me an alert if a cow has failed to leave the milking stall.”

More than just taking care of the physical activity of milking, the V300 captures vast amounts of data at every milking, from every cow – even from each teat. This data is all processed, analysed and delivered back in the form of simple visual reports. With a separate milk meter for each teat, the vacuum, pulsation and take-off are adjusted automatically, resulting in superior udder health.

The cows at Witham Hall Farm underline the success of the system; they are relaxed and calm awaiting their turn for milking, actually forming an orderly queue for the V300! Calmer cows are usually healthier cows with better longevity, productivity, reproduction and yield.

Although ‘rule of thumb’ suggests that one VMS unit is needed for every 60 cows, Hugh believes that is under-estimating their capability. “Our yields have already increased since we moved to VMS and theoretically we should be at capacity milking 120 cows with two machines. But, looking at the milking patterns it’s clear that each V300 could handle more – maybe even up to 70 cows.”

Hugh’s V300s have been at work since September last year. In March, when they have been in operation for six months, he plans to augment the system with DeLaval’s Herd Navigator. “That will give us more control over fertility and will also reduce vet’s bills, proving the worth of our investment.”