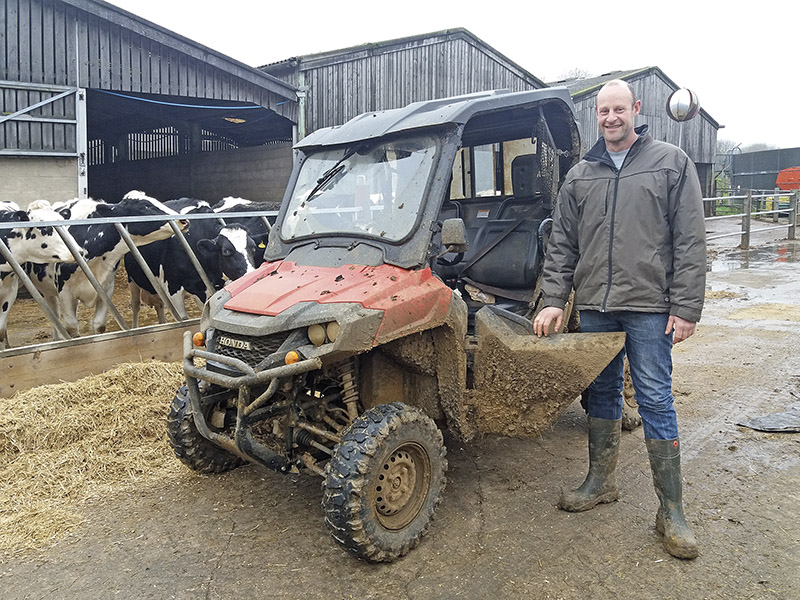 Third generation dairy farmer Austin Russell  is pictured here, with two of the things he appreciates most – his Pedigree Holsteins and his Honda Pioneer!

Austin runs an 870 acre mixed farm where he milks 200 Holsteins, in the Cotswold village of Barnsley. Having owned Honda ATVs over the years, another Honda was the natural choice when he was looking to buy a UTV. Following a demonstration from Tim Rochfort at our Toddington branch, Austin decided on the Pioneer petrol 700 with two and four wheel drive and automatic transmission and driven by a torque converter.

Austin usually begins his winter working day at 4am, heading off to the dairy for milking in the Pioneer and then he’ll use it to tow the feed trailer, check and move stock, transport staff around, carry feed and so on. The Honda Pioneer works hard in the summer too, towing the fuel bowser out to the combine and, more recently, ferrying supplies to the farm’s new ‘glamping’ site.

Austin has been impressed by the reliability of the new Pioneer. “It’s also safe for two people, stable, economical – and it pulls like a train when required! Even in the unrelentingly wet weather recently, the Pioneer  finds grip,  but it doesn’t get bogged down or mark the ground too much, ” he says.

The fact that the Pioneer 700 is a petrol model is seen by Austin as another plus. It’s quiet around livestock and is as economical as a similarly powered ATV. Its lightness adds to its agility and means it can go almost anywhere around the farm without churning up the ground and causing a mess in the winter.

If you think the Honda Pioneer 700 could be the UTV for you, check out Honda’s 333 offer – 3 Years 0%, 3 years Tracking subscription and 3 Years warranty.

For more information call Tim Rochfort on 07973 911934 or email tim.rochfort@thwhite.co.uk to arrange a demo.