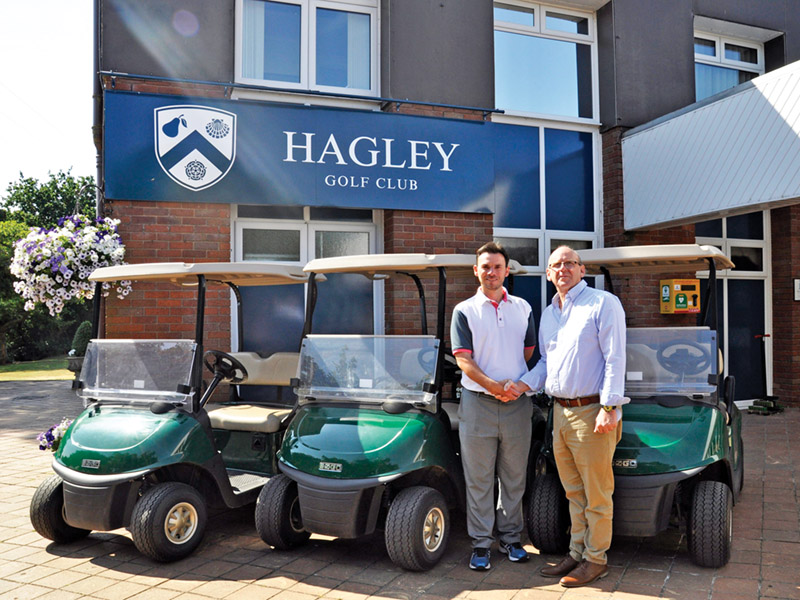 The four E-Z-GO RXV ELiTE golf cars purchased by Hagley Golf Club come with an unprecedented five-year, unlimited-amp-hour warranty, and feature Samsung SDI lithium batteries which require zero maintenance and are over 50 per cent more efficient than key rivals. As well as charging in half the time needed by lead acid batteries, they are half the size and a fraction of the weight, taking a load off the turf. It all adds up to the lowest operating costs the industry has ever seen.

Gareth Snelgrove, head PGA professional at Hagley Golf Club, said: “This is our first golf car purchase since 2008. After trying out the E-Z-GO ELiTE golf cars on demo, I knew we had to have them. The lithium batteries are so efficient, and will save us a lot of money in the long run. The cars are so much lighter as well, which means that we can build paths around the course using less expensive material, because the golf cars won’t put half as much pressure on them.

“We are delighted to be the first club in the UK to have bought the ELiTE golf cars – we have been using them for a while now and they have exceeded our expectations. They can get around 36 holes in one charge, and charge in a fraction of the time compared to our old lead-acid cars.

“The greenkeeping team love them as well; it’s the only vehicle that they could get on the course in winter without causing damage to the turf. We have to thank T H WHITE for the excellent service once again; we have a great relationship with the staff and they are always willing to help with extra golf cars at events.”

Hagley Golf Club is a 6,376 yard 18-hole golf course owned by Lord Cobham, the owner of neighbouring Hagley Hall. Lord Cobham purchased the club in 2017 from the Garratt family, who owned it since its inception in 1980. The club is set in 170 acres with picturesque views overlooking the Clent Hills.

To out more about Hagley Golf Club visit www.hagleygolfclub.co.uk, and for the low-down on E-Z-GO RXV ELiTE golf cars contact any T H WHITE Groundcare branch.