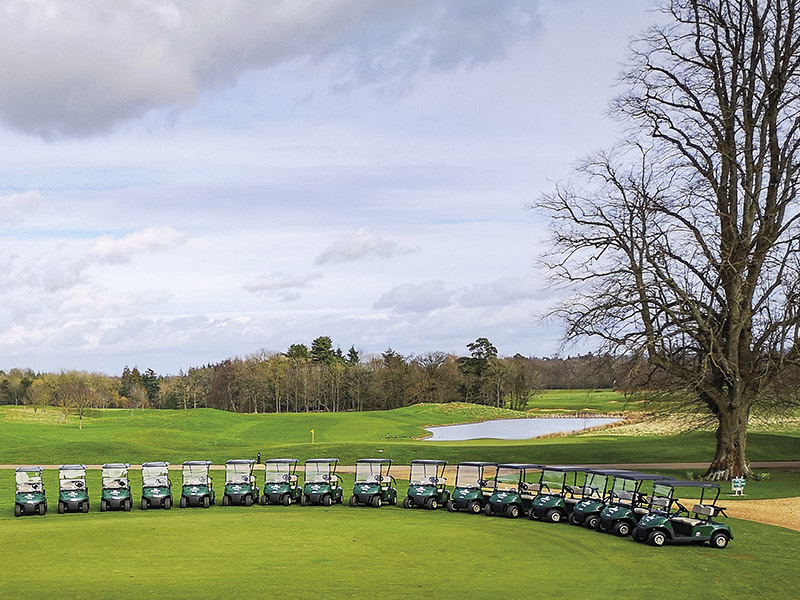 In January the PGA admitted Bowood Hotel Spa and Golf Resort as a PGA Golf Course and PGA Golf Academy – one of only three in the UK. As a result, Bowood will now also be the home of the English PGA Championship for the next three years.
With credentials like that the stunning Wiltshire course is clearly setting very high standards. As well as its beautifully maintained acres, its spa and luxury 4 star hotel, it offers a superb golfing experience. Readers of the popular Today’s Golfer magazine will also be familiar with Bowood’s PGA golf pro Ben Emerson who is a regular columnist.
With the club’s most exciting season to date coming up the decision was taken to renew the entire Bowood fleet of golf buggies and Ben was instrumental in opting for the latest E-Z-GO RXV ELiTE lithium battery vehicles. “Not only are the new buggies 126 kilos lighter – that’s more than equal to the weight of a person – but they are maintenance-free,” said Ben. “They go much further on a charge too, being able to go round the 18-hole course twice compared to once with our old buggies.” 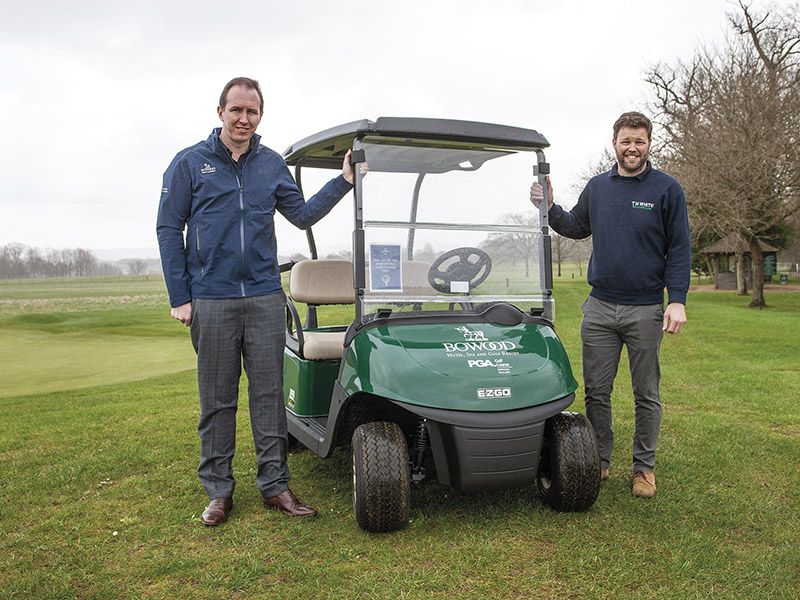 The fleet of 16 RXV ELiTE buggies was delivered to Bowood in early March after Stuart Fry from T H WHITE gave Ben a demonstration. “Unlike traditional lead-acid batteries the lightweight lithium pack needs no topping up or other maintenance and is faster to charge,” said Stuart.

Out on the course the new buggies have already proved a hit. “The players love them, while they also result in less ground compaction,” Ben added.
Although the advanced Samsung lithium battery technology means that the new RXV ELiTE costs more than buggies with traditional batteries, the extra range means that they can be used more intensively, thus reducing the number of buggies needed, the club now having been able to reduce its peak time fleet from 20 to 16. They use less power too, cutting running costs.
Residual values are also higher, meaning that a club like Bowood, which leases its buggies – usually over a four year term – can almost achieve a cost-neutral outcome. E-Z-GO also covers the ELiTE series with an unprecedented five-year, unlimited-amp-hour warranty.
Bowood’s blossoming reputation is unsurprisingly attracting blue-chip companies for corporate events. “We have a couple coming up this year besides the PGA Championship, including one for Aston Martin, and that’s another area where T H WHITE helps us,” says Ben. “For these events we often need extra buggies on a short term basis and T H WHITE is able to hire us whatever we need. It gives us great flexibility to accommodate events of any size.”
If you would like to know more about the E-Z-GO RXV ELiTE or other E-Z-GO golf buggies please contact Stuart Fry on 07774 212926 or Simon Bingham on 07813 835212.
Getting Personal, Groundcare
Share this post:
T H WHITEE-Z-GOES IT AT BOWOOD04.01.2019