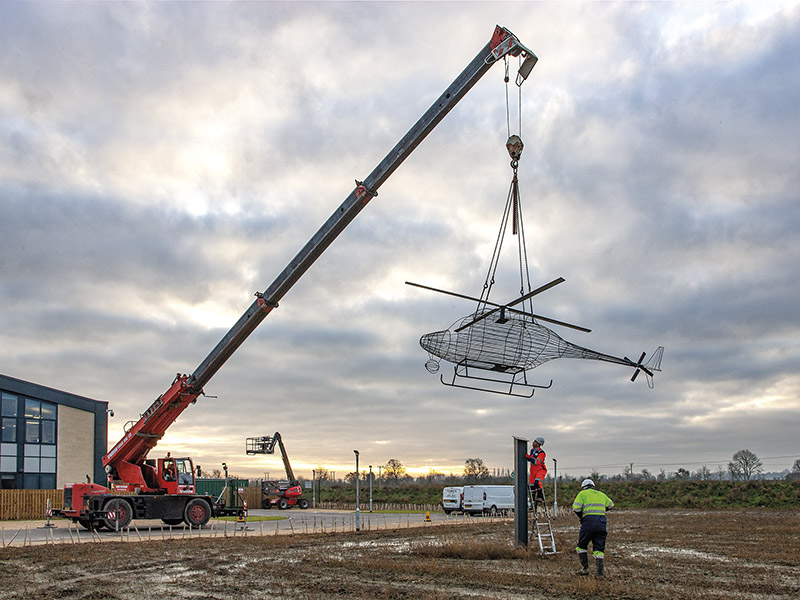 One very early, very cold morning last December, a small group of people and a large crane gathered beside a waterlogged field outside Semington.

The location was the brand new airbase operated by Wiltshire Air Ambulance, a charitable trust supported by T H WHITE. Although the exciting contemporary building was complete and being prepared for its official opening by HRH The Duchess of Cornwall, the area in front of the airbase had still to be landscaped. The first stage of that process was to be the installation of a dynamic wire-frame helicopter sculpture by Ben Lee, which was to be the future centrepiece of the airbase park.

The 6m, 250kg sculpture had to be lifted into position and secured to a steel plinth that had already been installed, and when the charity approached T H WHITE Projects director Mason Hatton, he was delighted to sponsor the lift, sending in a T H WHITE Projects crew to achieve the mission.

The facility opening, sculpture and entrance landscaping was completed with a ‘Heli-Mosaic’ of photographs. Airbase appeal donors and air ambulance users were invited to share a meaningful photograph that could form part of the mosaic. These represented personal stories ranging from patients who were airlifted by WAA to those who pledged contributions to the local trust. The delay in reporting this story allowed donors and competition winners to visit the facility before the winners were publicly named.

Funded by donations, Wiltshire Air Ambulance operates a helicopter which can attend an emergency anywhere in Wiltshire within 11 minutes. On average it carries out three potentially life-saving missions a day. You can find out more at www.wiltshireairambulance.co.uk.